Marks and Spencer’s Chicken Tikka Masala (CTM) ready meal has been my gold standard for CTM for many years. Whenever I travel to the UK, I make it a priority to score some M&S CTM and take it to my mum’s house to be microwaved and served with some basmati rice. However, Waitrose also make a mean CTM. Tonight for our family meal we served both and took votes to see if M&S is still the king of CTM or whether Waitrose has taken the throne. 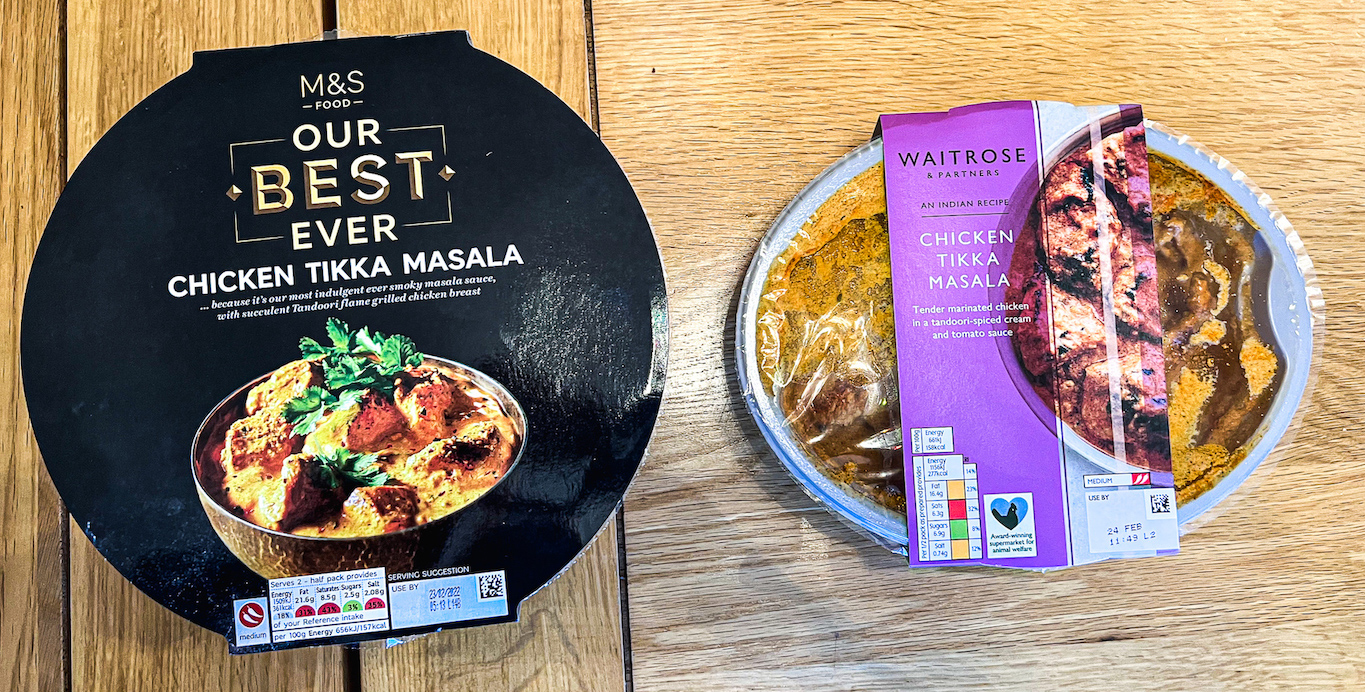 The M&S “Our Best Ever” version had a thicker creamier bolder finish and is sweeter than the Waitrose version. CTM is typically a fairly mild dish which is sometimes ruined with too much cream (I don’t use any cream in my own CTM recipe). I felt the M&S CTM had a deeper and more complex multi-layered flavour, with the “garam” (warm) spices showing through distinctively (e.g. the coriander, cumin, mace, nutmeg, cloves and fennel). The mixture of single cream and coconut milk helps to give the sauce a thick creamy velvety finish and the addition of fenugreek leaves adds a nice lift (something I often do with my own Indian chicken dishes). I also like the use of whole spices like green cardamom pods and cloves.

The chicken in both dishes was succulent and had good texture with the odd nice charred black spot, especially on the Waitrose version. Both versions had a decent level of seasoning and I did not feel the need to add any more salt or pepper.

For a moment I thought I could sense some freshly puttied window overlooking a railway embankment of rosebay willowherb, but it turned out it was coming from an actual window I was sitting next to, during a stormy windswept night.

Both versions were very good and it just comes down to personal taste. My wife and two kids preferred the Waitrose version, especially due it being lighter and less sweet. I preferred the bolder and more intense M&S version. Either would make a great easy meal with basmati rice and naan bread to mop up the sauce, perhaps washed down with a glass or two of Rioja.

High quality ready meals is not something I have come across in USA grocery stores. However, Marks and Spencer and Waitrose sell many ready meals which are often better than what you can find in a typical restaurant. A common trope of a middle class British family is to serve dinner guests with, unbeknownst to them, Marks and Spencer ready meals. The guests really enjoy the food, and never guess they are eating microwaved and boiled in the bag food. I would certainly be very happy!